(TFC) Washington, DC – Donald Trump’s PR machine has engaged in an amazing feat. It has cast a spell over conservatives in the country and caused those base Republicans to abandon everything they stand for. If you’re a conservative, you need to read this more than anyone.

1. Donald Trump is a conservative. He’s not. He’s never been one. He referred to the Democratic party as the party of the “working man.” When he first publicly discussed running in 1990, he said he’d better run as a Democrat. In fact, until 2010 most of his money went to the Democratic party. The most hated Democrats, Reid and Pelosi, came to power with his help. For the last five years, he’s been systematically buying the GOP. Incidentally, that was the same time he switched his party to independent because he was considering a third party run. Politico reports that

Just $1,000 of Trump’s money in the 2006 cycle went to the National Republican Senatorial Committee.”

Basically when he decided he needed some dummies to dupe, he started funding the Republican party.

2. Donald Trump would repeal Obamacare. Maybe, but only to replace it with a more expansive and expensive form of government controlled healthcare. Trump once said, “We must have universal healthcare.” He followed that up by suggesting we adopt Canada’s system: “Doctors might be paid less than they are now, as is the case in Canada, but they would be able to treat more patients because of the reduction in their paperwork.” His solution was basically the same plan Bernie Sanders is supporting today. Trump said, “we need, as a nation, to reexamine the single-payer plan.”

3. Donald Trump supports the Second Amendment. No, he doesn’t. He’s just another lying gun-grabber. His website states: “The Second Amendment to our Constitution is clear. The right of the people to keep and bear Arms shall not be infringed upon. Period.” Of course in 2000, he wrote a book about how he would make America great again. It’s called America we Deserve. Here’s a quote: “I support the ban on assault weapons and I also support a slightly longer waiting period to purchase a gun.” He blasted the Republican party because they “walk the NRA line.”

4. Trump will destroy Hillary. Clinton and Trump are two peas in pod. She’s a “fantastic senator“ according to Trump. Clinton received money from Trump in 2002, 2005, 2006 and 2007. Then there was the donation of at least $100,000 to the Clinton Foundation. Many write this off to Trump being a corrupt businessman and say he was just buying politicians.  He’s implied he’s bought politicians. Does it really make sense to give someone who is apparently openly corrupt access to the highest office in the country? It seems his bid for the Presidency is really just an attempt to cut out the middle man.

5. Trump’s anti-intrusive government. No, he’s not. Something as simple as the government using eminent domain to steal land from one citizen only to hand it over to a private developer is something he supports. In his own words: “I happen to agree with it 100 percent.” That’s not surprising since he attempted to use the power of the government to steal land from citizens. This friend to the common man once tried to use the power of eminent domain to seize a elderly widow’s land so he could build a parking lot for limousines. It’s odd that many Bundy supporters see Trump as the answer to their problem. 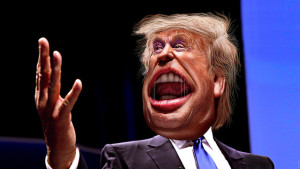 6. Trump’s going to stop companies from shipping jobs overseas. Contrary to his claims, he sends jobs overseas. His clothing line is made in Mexico, China, and Bangladesh. He’s blasted companies like Ford and Apple for overseas investment, but his $70 polo shirts which are made in China are perfect to lounge around poolside at one of his many overseas investment properties.

7. Trump will stop immigrants from taking American jobs. Trump’s companies bring foreign workers into the United States. Since 2000, his company utilized a visa program to bring in workers, let them take American jobs and money then head back to their country with their paychecks. His company has brought in 1,100 of these workers. These are not specialized jobs either. These are blue collar jobs that could have gone to his base voters. Recently one of his resorts in Florida sought to bring in 70 foreign workers to act as cooks, waiters, and cleaners. It’s pretty amazing that he would do that, considering he believes the unemployment rate is somewhere between 18 to 20 percent.

8. Trump’s going to handle ISIS. First, you’d have to believe that ISIS is an actual threat to the United States. To shatter Donald Trump’s image of tough guy of the year, remember he obtained deferments to make certain he was ineligible for service during Vietnam. He said he felt he received “more training militarily than a lot of the guys that go into the military” because he was sent to a military-themed boarding school for poor behavior. Keep in mind he recently criticized Senator McCain saying, “He’s not a war hero. He’s a war hero because he was captured. I like people who weren’t captured.” McCain was shot down and held by the Vietnamese for five years fighting in the war Trump made certain he would not have to fight in.

9. Donald Trump would defund Planned Parenthood. Sure, he said that. He also said he wouldn’t. Then he said he would. He said he was “very pro-choice.”  Later, he said, “I’m pro-life. I have been pro-life.” Just like everything else with Trump, he’s telling the audience what they want to hear. He’s conning the audience. If you support him, he’s conned you. You can’t actually support his positions because nobody knows what his positions really are.

10. Trump’s a regular guy. The fact that Americans have been so easily sold on the idea that a trust-fund baby billionaire who attended private boarding schools is somehow representative of the American people shows how easily they can be led to believe anything.

11. Trump tells it like it is. Obviously, he doesn’t. He’s told you what you want to hear. He’s gathered a group of middle-aged, middle-income, middle-Americans, and sold them on a pack of lies. Put down the kool-aid.

Donald Trump is the single greatest threat to the national security of this country. His habit of being economical with the truth, and the arrogance of a “do what I say, not what I do” attitude is typical of Washington insiders. Trump’s fiery and violent rhetoric combined with his cult following make him dangerous to the American way of life. I’m not supporting any candidate, but Donald Trump must be defeated at all costs.

This article (11 Things Every Conservative Needs to Know About Donald Trump) originally appeared on The Fifth Column and was used with permission. Tune in! Anti-Media Radio airs Monday through Friday @ 11pm Eastern/8pm Pacific. Image credit: DonkeyHotey. Help us fix our typos: edits@theantimedia.org.